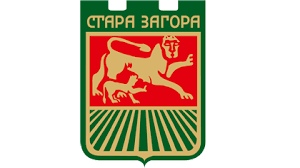 Stara Zagora Region is situated in the middle of Southern Bulgaria. It is bounded by the regions of Sliven, Yambol, Haskovo, Plovdiv, Gabrovo and Veliko Tarnovo. It covers the Stara Zagora plain, Kazanlak kettle, some of the middle parts of the Balkan Mountains and the Sredna Gora Mountains. The Trakia and Maritza highways as well as the Sofia-Karlovo-Burgas, Sofia-Plovdiv-Burgas and Ruse-Podkova railroads cross the region.
The region is rich in water resources. Besides the upper stream of the Tundzha River and its numerous tributaries, the area is abundant in karst springs. Map of Stara Zagora DistrictThere are a lot of mineral springs in Pavel Banya, Stara Zagora spas, the village of Yagoda. Koprinka dam is one of the biggest in the country. The fertile Kazanlak kettle is famous for its special sorts of fragrant roses from which the precious rose oil is extracted. In the vicinity of Radnevo is the mining and power plant complex Maritza-Iztok.