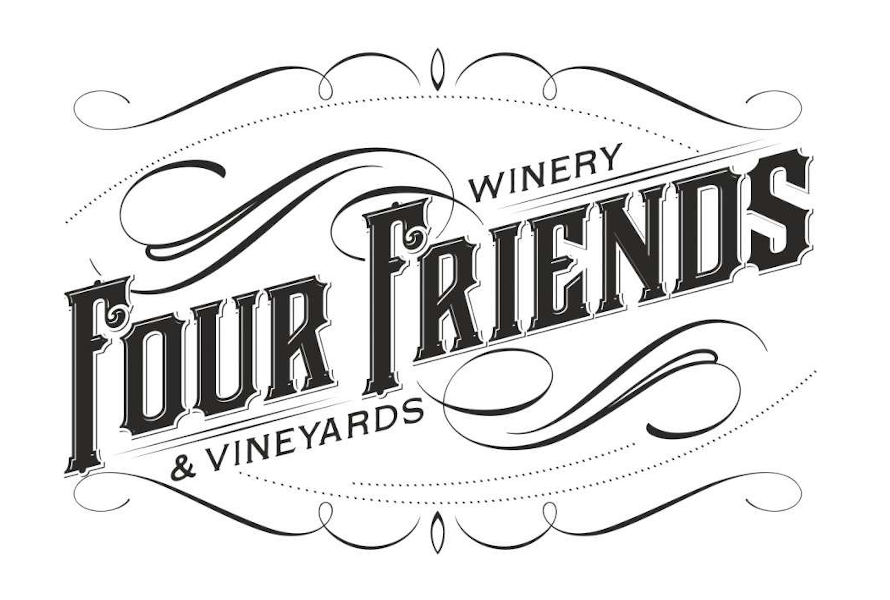 The Four Friends winery has over 40 hectares of vineyards in the Thracian Valley, the best wine growing region of Bulgaria. Our estate is nestled in the folds of the landscape near the village of Gorno Botevo, east of the district centre of Stara Zagora. Our choice of location was not accidental as this region is famous for its winemaking tradition spanning the last four millennia! It is this very tradition that the four close friends and wine enthusiasts have set out to revive.
The wines at Four Friends are made using classic methods with an exceptionally high share of manual labour, which, to a large extent, determines the quality of the wine. The winery has a total production capacity of 400 thousand litres annually, and a bottling capacity of some 300 thousand bottles. Like all small-scale boutique wineries, we use ‘vat’ type fermenters to make high-quality wines. This allows for the entire production process to be controlled manually, which is essential for the mellow taste and rich aroma of our wines.
The wine is then left to mature in oak barrels, which are topped up regularly while our cellar master carefully monitors the qualitative changes occurring in the wine as a result of oaking. The winery has a modern quality control lab with state-of-the-art equipment. The wines of Four Friends are produced by classical technology with predominantly manual labor. The wine is fermented in aged in oak barrels.

2006 may be the year of birth of Four Friends, but the idea of creating a boutique winery to produce quality wine from the Thracian Valley was conceived a lot earlier. The first vines were planted in 2006 under the watchful eye of a team of agronomists specialising in viticulture. They selected the best French varieties that are considered suitable to the climate and natural conditions of the region.
WHY IN THE THRACIAN VALLEY?
The Thracian Valley is known as the cradle of winemaking in the Balkans. The Thracians were famous throughout antiquity as the best winemakers; classic authors like Homer himself attest to the superiority of their craftsmanship. Aristotle (4th c. BC) told of the mythical wines of Arcadia (Thrace), which were so thick they had to be watered down before drinking. The grapes, the vineyards, as well as Dionysus, the God of Winemaking, were so worshiped by our ancestors that they had them minted on their coins.
It is hardly accidental that the town of Star Zagora hosts an annual Wine Festival, which gathers together Bulgarian wine makers as well as lovers of quality wine from Bulgaria and overseas.
The balmy temperatures and the suitable sandy loam soils are extremely favourable to the grape varieties Merlot, Cabernet Sauvignon, Cabernet Franc, Petit Verdot. The wines made from such grapes are characterised by their intense colour, high density, powerful aroma with warm, southern tones and a significant potential for many years of ageing.
The vineyards of the winery, located near the village of Gorno Botevo, blend nicely with the surrounding landscape, as though they are growing here naturally, the way they did thousands of years ago. The exact spot where the winery was built seems to carry within itself the spirit of the Thracians, jealously guarding their traditions. Sample our wine and experience the taste of ancient tradition!

Presentation and tasting of wines

1. Wine Tasting Packages
https://www.fourfriends.bg/pages/degustation
2. Four Friends Winery introduced a new private service for the wine enthusiasts in Bulgaria
You only have to: Select the grape variety
Pick out of the style of the wine Our team of winemakers will:
Consult you to choose the grape of really good quality
Offer wine making methods and will create a plan of your dream wine
Take all the care and responsibility to make your wine a premium product
Our marketing team will:
Design your personalized wine brand, wine box or any additional details that you wish.
https://www.fourfriends.bg/pages/winemaking