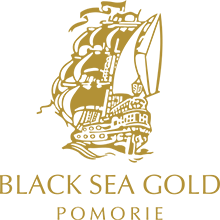 Black Sea Gold produces high quality red single-variety and blended wines from Cabernet Sauvignon, Merlot, Syrah, Cabernet Franc and Pinot Noir. The wines are characterized by exceptional finesse and minerality, which the grapes can acquire only in the region of Pomorie. Technologists do not reveal the secret of superb taste - "microwine" technology! The ripe fruits are collected in small boxes with attention to each berry in the modernly equipped micro-winery of Black Sea Gold.

The history of the Black Sea Gold Winery began in 1924, when enterprising Bulgarians from the town of Pomorie set up Dimyat: the first viticulture and winemaking cooperative. The centuries of experience in wine-making, in turn, gave wine-growers from Pomorie the self-confidence to eventually build the first modern wine-cellar in the town in 1932.
In the 50s of the 20th century, Black Sea Gold acquired the image of a modern wine factory with a highly valued production. Twenty years later, the Pomorie winery had something new to be proud of: the establishment of a dedicated corpus of 12,000 oak barrels for aging of the wine distillate. In 1994, the winery imported 8 original Charentais pot stills from the Cognac region in France, which helped Pomorie’s Black Sea Gold start creating the highest-quality types of rakia and brandy in Southeast Europe.
Today, the one-time cellar dating back to 1932 is at the heart of a remarkable modern wine tourism hotel complex, accompanied by a lovely restaurant, a wine tasting hall, and a museum known to the connoisseurs of high-quality wines as Via Pontica.
In the 2007 – 2013 period, Black Sea Gold invested more than EUR 5.5 mln. in the construction of a micro-winery. Micro-winemaking is a one-of-a-kind winemaking technology where all processes are carried out by hand. This allows for the production of limited series of high-quality wines.

This winery doesn't have any wines added.